Managing an M&A pipeline befitting of today’s deal environment is increasingly becoming a juggling act of speed – while at the same time being a process requiring effective management of volumes of confidential information. The key to maintaining consistent high-volume deal flow and effective pipeline management is a systematic and repeatable approach. Taking the time to structure this process, the pattern of workflow and the standard documents to be used in the evaluation of targets will allow for more informed and timely decisions to be made and ultimately, provide a greater chance of the most suitable targets being pursued.

Across the pipeline process, a vast amount of information will be in circulation among the deal team. While perhaps obvious, it is imperative that the manner in which information is managed and stored is considered with care. On this note, it is important to understand the security limitations of the solution selected (particularly if confidential information has been supplied by targets) and the ease with which information can be analyzed/commented on in a collaborative manner (this requirement becomes more relevant as the volume of targets being evaluated increases).

For organizations that have encountered the chaos of using multiple tools to run the pipeline process (think multiple Excel, Word and PowerPoint documents) a digitalized approach via adoption of a Smart M&A Platform should be considered.

The Importance of Stage-gates When Evaluating Targets

As with other areas of the M&A process, the approach to Pipeline Management should be made systematic and repeatable, where possible. As a start, any organization pursuing M&A should adopt a well-defined Stage-gate Approval Process in order to support effective decision-making across deal origination.

Many organizations have poorly managed Stage Gate processes (or none at all) – leading to (i) altogether lost opportunities with potentially well-fitting targets, (ii) losing out on targets later in the process due to the inability to make timely decisions or (iii) acquiring the wrong/poor-fit targets.

A well-functioning Stage Gate Approval Process can be viewed as a three-tiered approach: 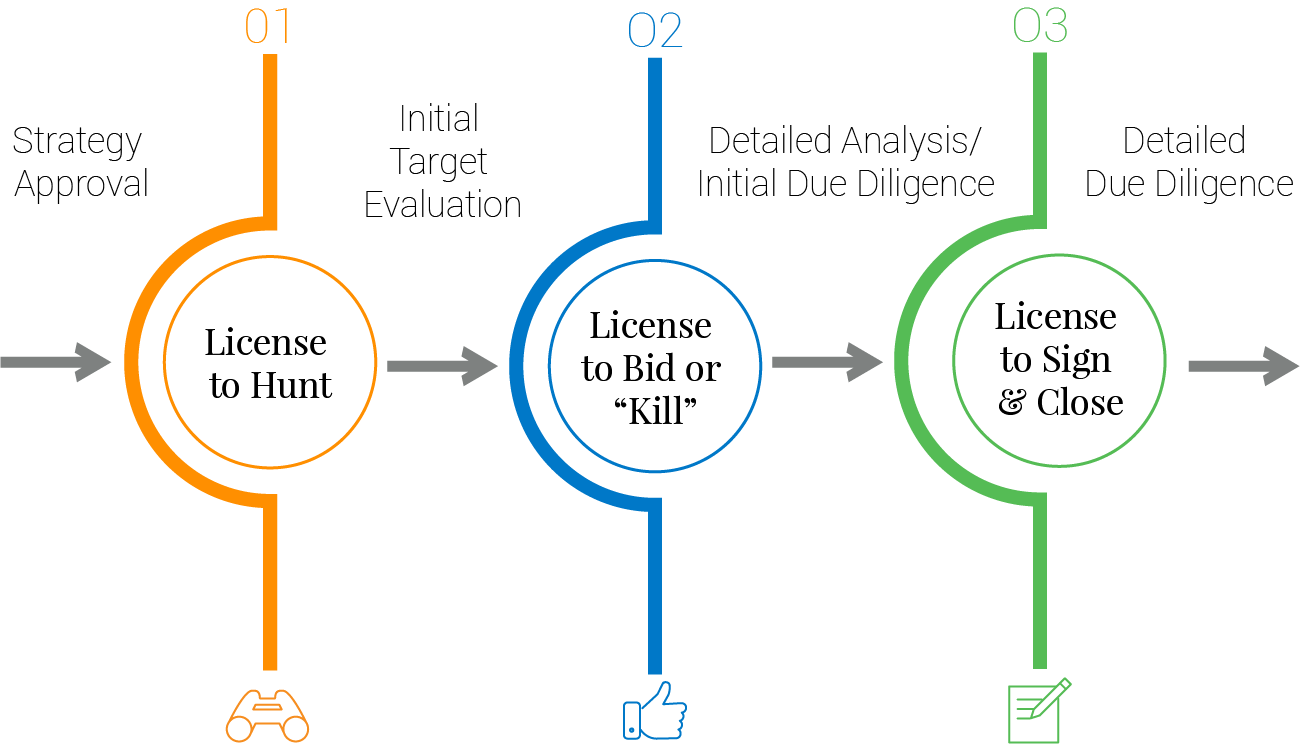 Following confirmation of a “License to Hunt” (i.e. once a strategy has been approved and the target-brief is understood) an initial evaluation of targets from an “outside-in” perspective should be carried out, so as to establish whether targets could contribute to the overall strategy (essentially, this process should reaffirm and align with the higher level strategic considerations made at the outset of the M&A campaign).

At this stage, an initial evaluation of targets should be kept relatively high-level (given the likely high number of targets in the pipeline that must be evaluated) and should cover fundamentals such as strategic, commercial, financial, operational and cultural fit (under these headings a number of sub-screening criteria should be developed – under finance, for instance could be: revenue/EBITDA/ cashflow/debt, etc.). Consideration should also be given to how detailed due diligence would be approached and compatibility of the target from an integration perspective (i.e. is it even feasible to pursue an acquisition of the target in question?).

2. License to Bid or Kill

Following an initial evaluation of a target, and the decision to proceed to the next stage of the pipeline, initial due diligence should be carried out (the idea being the M&A team will have a “License to Bid” via a term sheet or LOI following successful initial evaluation and if detailed analysis/initial due diligence goes well). Alternatively, the M&A team has a” License to Kill” a target if it is considered to offer a poor fit.

The purpose of detailed analysis/initial due diligence is to (i) reaffirm the conclusion made as part of the initial evaluation (i.e. reaffirm the target is a good fit and should be pursued – via reference to more in-depth strategic, financial, commercial, and operational considerations, etc.), (ii) to assist with indicative valuation/pricing decisions and (iii) to further identify any challenging integration issues. As part of initial integration considerations, thought should be given to the operations of a target, how they align/complement the existing operations of the acquiring organization, what synergies are available (cost and/or revenue) and the magnitude of the integration project that would have to be undertaken.

Whether an M&A team has a “License to Sign & Close” (i.e. the target is considered a "go” rather than a “no go” following the conclusion of detailed due diligence) will ultimately depend on the key decision makers within an organization (likely to be the Board of Directors/Shareholders and other Key Stakeholders such as Investors). Here, the Stage Gate Approval Process should build upon the questions and answers covered in the two previous Stage-gate Processes (rather than introducing a myriad of new acquisition criteria and questions – which could muddy the waters).

Key decision makers will be viewing a target from a more objective standpoint in the sense that they will not have been subject to the finer details of the earlier evaluation stages. This provides the advantage of decisions being made on the basis of whether a target would support the overall corporate strategy, in addition to addressing high level matters such as desirability (“what synergies are on offer?”), feasibility (“can the deal actually be closed?”) and validity (compare valuation to expected future performance and anticipated synergies and question “does this look reasonable?”).

Webinar: Driving M&A Results Early in Sourcing and Due Diligence

5 Must Haves for Constructing a Winning M&A Pipeline

Webinar: M&A Software Will Transform Your Day-to-Day for Pipeline Management